A lawyer since 1989 and a member of the North Carolina bar since 1994, Kim has lived several lifetimes of experience.

In the first chapter of her life, she was raised in a small town in Florida on a small family farm. Her family grew almost all their own food and lived close to the earth.

Later, she attended Warren Wilson College in North Carolina, attracted to the mountains, the college farm, the large international student population, and the fact that it wasn’t in Florida.

During her sophomore year, she married a Colombian and they became parents of a son. Parenthood inspired Kim toward taking action to make the world a better place. She graduated with a double major of Economics & Business  (the practical degree) and International Studies with a concentration in Latin America (to feed her connection with a global community). She served as the Assistant Foreign Student advisor in the absence of the Director who was president of the NAFSA that year and interned at a travel agency (foreshadowing her later life!)

After college, Kim returned to Florida as a single parent of a pre-school child, to be close to her family support structure. She worked in the typical tourist industry jobs. She was at Walt Disney World when the EPCOT Center opened, ran a nearby hostel and guesthouse, and worked in retail.  Her second husband’s family owned taxi companies and she managed the local company as her family grew to a blended family of seven children.

The family was, to say the least, “complicated” by family bonds that weren’t necessarily biological.  Her husband had a habit of getting arrested for civil disobedience. Someone in the family had to go to law school to keep it all sorted and Kim was chosen to take it on.

The first person in her family to attend college, Kim knew no lawyers and wasn’t quite sure what law school was about. She just set her mind to getting her law degree at the University of Florida.  Having seven children at home, running and working in a business, driving 75 miles round-trip to class each day, and a divorce in her second year didn’t keep her from graduating in 2.5 years. During law school, she was also a volunteer Guardian Ad Litem in cases of child sexual abuse, chosen for a pilot program in using GALs in divorces, was a co-founder of the UF Law ACLU chapter and a club to support Parents At Law School (PALS).  She passed the February Georgia Bar while she was still in law school and the Florida bar in July.

And she decided NOT to practice law. She’d had a taste of the adversarial system and some antagonistic classmates. She resolved to work in the nonprofit system and use her law degree to make a difference.

The next chapter of Kim’s life was focused on service.  She was the Executive Director of the Sexual & Physical Resource Center in Gainesville, Florida. She developed a DV task force that was studied and replicated by the national coalition.  She presided over services in 11 counties, supervised the building of a new shelter and conferences with national speakers; she trained victim advocates, police and probation officers, and raised more money than any of her predecessors.  During those years, Kim also became a licensed foster parent.

And in 1991, she moved out of Florida (she would say FINALLY moved) to North Carolina.  For the first few years in NC, she worked part-time jobs while participating in personal development programs offered by Landmark Education. It was during one such program, in 1993, when she met Forrest Bayard, a Chicago lawyer.  Forrest stood up in the course and began to talk about how he practiced law with dignity, encouraging his divorce clients to be friends at the end of the process.  He talked about transformation and healing.  And Kim’s life went from black and white to color.  She took and passed the NC bar a few months later.

In the next chapter, Kim opened a law practice in a small town in North Carolina. She experimented with multi-disciplinary practice, holistic approaches, and alternative practices to litigation.  Mediation was new and collaborative practice was even newer but she added them to her practice. Law students from the University of North Carolina came as interns. A social work intern came from University of Greensboro.  Kim taught Intro to Divorce classes at the Women’s Center. Her office counselor ran divorce groups for children in the schools, gaining recognition for the firm. Kim launched a lawyer website at a time when most people didn’t even have email addresses yet. She hosted a conference on Latinos in the Legal System, to educate social services and law enforcement on issues of a new immigrant population.

Proud of her cutting-edge holistic law practice, she registered for the 1999 conference of the International Alliance of Holistic Law, expecting to be the star of out-of-the-box lawyers. At IAHL she met lawyers who were using yoga with their clients, leaders of the Therapeutic Jurisprudence movement, Professor and psychologist, Susan Daicoff who was studying the well-being of the lawyers who were practicing in different ways, Humanizing Legal Education founder, Larry Krieger, ABA editor and author, Steve Keeva, and many others who were creating a new paradigm of law.  She felt like a small-town hick, way behind the times. And, after stepping back and taking stock, she upped the ante.

Kim’s husband was an expert in issues having to do with Y2K and got a job offer in Portland, Oregon. He moved there to try it out and the rest of the family followed in early 2000.  Not being licensed in Oregon, Kim started volunteering with the IAHL, coaching lawyers, and creating a website that would house her new coaching practice.  The site, called Renaissance Lawyer, was the beginning of the next chapter.

The Renaissance Lawyer website was 400 pages long, basically a book on the web.  It included information about collaborative law, drug courts, appreciative inquiry, emotional intelligence – a plethora of new ideas that were shaping innovation in law.  In its first year, the site had 100,000 visitors….at a time before there was technology to collect data about any of them. But, the visitors wrote emails to Kim, called her, even wrote snail mail.  The most common refrain was, “I thought I was alone!”

The RL website was the beginning of the Renaissance Lawyer Society, a group of lawyers working together on their shared values. The Cable, an email newsletter connected them with news of happenings. Later, several members of the movement suggested that Kim should start a magazine for the growing movement.  After two years of building a business plan and raising funds for a print magazine, video came to the internet and print magazines began to fail as everyone moved on line. CuttingEdgeLaw.com was the answer.

In 2007, Kim was on the organizing committees (sometimes as the lead) of eight conferences.  She spoke at those conferences and more. She crisscrossed North America, sometimes going to several conferences before returning home to do laundry and go again. Such a lifestyle was not conducive to running a law practice, even one where she didn’t go to court.  Something had to change and she decided to prioritize educating people about this new way of law practice rather than practicing law. By then, Forrest had died and she felt a responsibility to share their shared vision with other lawyers who thought they were alone, to inspire them in the way that Forrest had inspired her.

In 2008, Kim closed her law practice, signed over her house to her ex, and partnered with a videographer to travel around the country, capturing the stories of leaders in the movement.  Her IAHL friends in Florida were the first stops. She went to conferences on restorative justice, holistic law, collaborative practice, and more, interviewing participants and speakers, building a YouTube channel of inspiring stories.

This was long before being a digital nomad had a name. Most people thought she’d lost her mind.

In 2009, the American Bar Association named Kim as one of the first 50 Legal Rebels.

A few weeks later, an editor called from ABA Publishing and asked Kim if she wanted to write a book, saying, “We knew law was going this way, but we didn’t know just how far it had come.”  When the book was published in 2010, Lawyers as Peacemakers was an immediate ABA best seller.  Kim was no longer just that weird homeless lawyer; she’d hit the mainstream!

From that point, there were more speaking and training opportunities. Kim’s cross-country book tour, from Key West, Florida to Boise, Idaho, had 33 stops.

In 2011, a gathering of lawyers in Colorado aligned on a name for what was happening: the integrative law movement was born.

In 2012, she was invited to Australia, her first of many international trips. And over the next several years, she circumnavigated the globe several times.  Eventually, she traveled to every continent and had trained hundreds of lawyers, spoken to thousands of law students, and consulted with conscious companies and legal organizations in many countries. The ABA published her second book, Lawyers as Changemakers, at the end of 2016, reflecting the growth and global impact of the movement.

In 2020, her travels were interrupted by the pandemic and Kim retooled to take her work online. She started teaching a course at Quinnipiac University School of Law. The Clinic was popular with students (and the Dean) and developed into a two-semester simulation course and clinic combination.  In July, 2022, Quinnipiac launched the Project for Integrative Law in Legal Education with Kim as a co-founder.

Kim returned to travel in 2022, first in the US and then to South Africa in late June, 2022.  There she worked with many law schools and spoke to many audiences about bringing integrative principles into legal education. 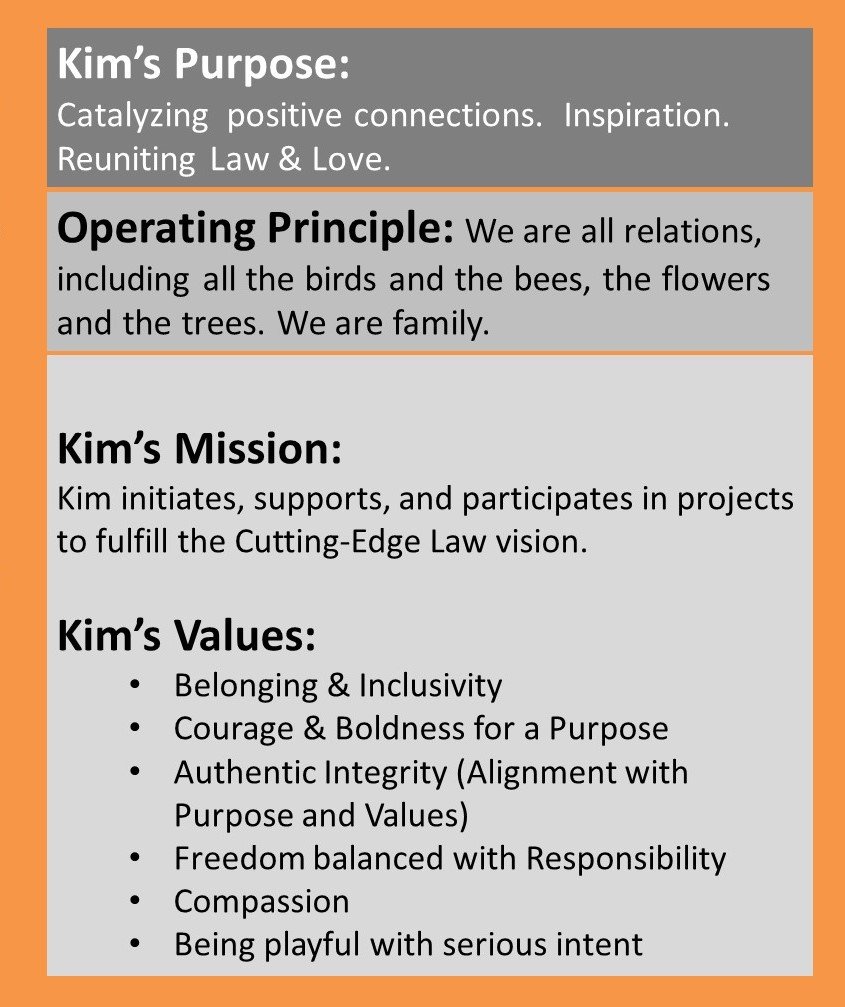 Despite all the derogatory jokes about lawyers, there is a global movement in the various world legal systems to bring greater consciousness into the judicial process. This consciousness is variously expressed through a wide range of people and organizations, large and grassroots, who are bringing conscious leadership into the practice of law. Sometimes referred to as the “integrative law movement” there is no single focus or common objective; all are motivated to humanize the various legal systems, shifting from a paradigm of separation, fear and scarcity to one of interconnectedness, compassion and sufficiency.

J. Kim Wright is a lawyer who now travels the world as an advocate and ambassador for transformative approaches to the law. She is constantly on the move serving as “a butterfly with a cause,” touching down wherever there is active effort to bring about radical change in her profession. She serves as a cross pollinator amongst lawyers active in restorative justice, peacemaking, therapeutic jurisprudence, holistic law, contemplative practices, and many other expressions of this new direction in the practice of law. Mediation over litigation, rehab over prison for drug offenders, and collaborative law are a few other examples of innovative transformations of legal systems throughout the world.

Experience and Training in Personal and Organizational Development

Certifications:
Organizational Development & Community-Building Related Training & Activities:
Founder/co-founder and board member of organizations including:
[Past] Board Member
Director/Associate Director:

SECTIONS OF THE SITE